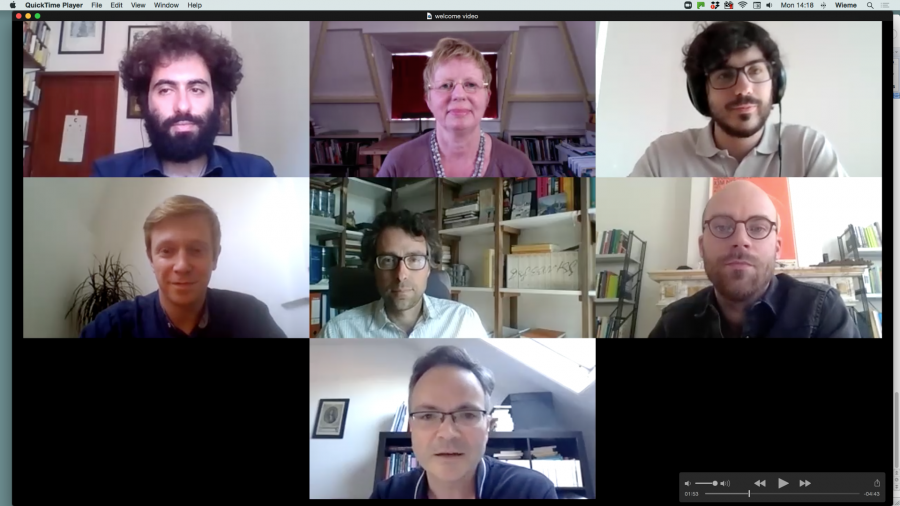 When the idea of organizing an annual Kant Conference started, and who is organizing it?

Early 2013, it turned out that the abstracts I myself and two PhD students at the Institute of Philosophy had submitted to the NAKS biennial conference had been rejected. We decided to host a conference on Kant ourselves at the same dates, in particular to provide European scholars who could not attend the NAKS conference with an alternative. The organizing team consisted of Arnaud Pelletier, who was a postdoc in Leuven at the time, Simon Truwant, Dennis Vanden Auweele, and myself. We had only three to four months to set everything up, and only a small budget, but all went well. The three keynotes we had asked immediately after our decision accepted the invitation and those who had a research budget agreed to pay for their flights and hotel themselves. Apart from the three keynotes, we selected 22 speakers. Since that first edition, LKC has retained the same structure: a two-day conference on Kant without specific theme, with three keynotes, 22 papers divided over sessions of 2-4 papers and two parellel sessions. The team of organizers currently consists of Arnaud Pelletier, who became a professor at the Université libre de Bruxelles, myself, and four junior researchers who are part of my research team.

Can you tell us about the past editions and what have you achieved so far with the conference?

LKC aims to provide a platform that enhances the exchanges and debates between (junior and senior) researchers from all over the world. From the very beginning we have tried to be inclusive. We single out neither a specific topic, nor a specific part of Kant’s oeuvre, nor a specific approach. We have had many papers on themes that are not often discussed outside of specialized workshops, such as Kant’s philosophy of religion, his thoughts on mathematics, his pre-critical works, or his relation to lesser known predecessors such as Wolff and Crusius. Despite the parallel sessions, this has allowed participants to attend sessions outside their own domain and broaden their perspective. In 2019, we deviated from the normal format: we organized a conference on the Transcendental Dialectic and, by way of experiment, invited no keynote speakers. This was a positive and interesting experience, and something we might repeat in the future.

In all other cases, we invite keynote speakers who are specialists in different areas of Kant’s philosophy and ideally represent different perspectives on his thought. We have invited speakers from the US, various parts of Europe, Australia, Brazil, and Argentina, and the presenters come to Leuven from many different parts of the world as well. The three keynote speakers always included one or two women. The positive feedback we have received over the years, as well as the fact that we received  almost 160 abstracts for the 2020 edition, suggest that LKC has become a significant event for junior and senior Kant scholars alike. Many participants told us they were impressed by the quality of the papers and inspired by the open-minded and stimulating discussions.

How do you evaluate the submissions?

The abstracts and personal details are gathered by a PhD student who is not involved in the selection process. The abstracts are ranked between 1 and 4 by three to four organizers. Their rankings are combined in one file. During a meeting of at least 4 hours, we discuss the abstracts in two rounds, especially the ones about which our views diverged. We try to focus on quality alone.

What I have probably valued most over the years is the sense that 50 researchers or so with very different backgrounds and views become part of an ephemeral community, one that exists for two days only even though part of the participants knew each other beforehand and would stay in touch with people they had met for the first time. The sense of being part of a community is of course strengthened by things such as the pre-conference dinner, the coffee breaks, the city walk, the conference dinner, and the drinks after the conference, but the backbone of the conference is made up of the talks and discussions during the panels.

In 2020, you have organized the first online conference due to the pandemic. What was the reasons of your decision?

The program was ready. From somewhere March onward, the Philos-L list became flooded by annoucements of cancellations or postponements due to the Covid-19 crisis. I had started to teach a small seminar on Zoom and was positively surprised about the quality of the meetings. I thought that researchers – especially junior researchers – would profit greatly from working on their papers and sharing their ideas with others during the lockdown. It might help them to focus on something uplifting, something unrelated to the crisis, and keep up morale. I had seen a few announcements of online talks and workshops, and thought we should try to go against this depressing stream of cancellations. The other organizers – we are a team of seven at the moment – agreed. From that point onward, we started to rethink the conference step by step and to prepare everything.

What are the pros and cons of the online conference? Do you plan organizing online events for the future editions?

Evidently, participants missed the opportunities to socialize and continue the discussions in an informal settings. We tried to make up for this by leaving open the Zoom meetings after they had formally ended, so that participants who wanted could ask further questions or talk about something else. We also had ‘post-conference drinks’ with the speakers and organizers: they could join Zoom meetings hosted by three of the organizers. I think this was nice and that we might come to appreciate group conversations online even more if we get more used to them.

All of us agreed that the biggest advantage of the online version – and online conferences generally – is the fact that many people who would never have been able to attend the conference in Leuven could participate. We decided to close the registration after 120 people had registered – about two weeks before the deadline – in order to have no more than 25 to 35 participants in each panel and guarantee a degree of continuity between the panels. The participants came from many different countries and had much more diverse backgrounds than those who normally attend the conference. This was a very enriching experience. I also think that an online conference, especially if the papers are being distributed beforehand, makes it easier for everyone to participate in the discussions. We had the impression that female participants felt more at ease to ask questions. There are simply less barriers: no financial, geographical, or political barriers, a level playingfield, and a sense of equality among everyone who participated more generally. To be sure: this requires that one take into account the different time zones and that the majority of participants has their camera’s on.

As to future conferences nothing has been decided, but it is likely we will continue to organize online conferences or workshops from time to time. Of course: we do not know how many good abstracts we would receive if researchers know beforehand the event will be online, but since many more researchers will submit abstracts I see no reason to worry about this, and it is definitely something that should be tried out.

Currently, a number of conferences, including philosophy conferences, have been moved online. Speakers and audiences are adapting. I hope researchers and organizations will continue to host part of their events online independently of the current crisis. It can be done with a very low budget or no budget at all, one can be much more inclusive, it is good for the environment, and much of what we value in a conference can be gained from online exchanges as well.